Zabou Breitman - The Company of Ghosts

Two women, mother and daughter, lead a cloistered life in a small apartment. The bailiff, in charge of making the inventory of their possessions before the seizure, will become, in despite of himself, the interlocutor of those two women haunted by the ghosts of History. The mother adds a touch of colour to the darkness of the subject, using a fantastic and rude vocabulary, sometime dreadfully funny: she speaks of a certain Maréchal Putain (“whore” in French), mistakes the bailiff for Darnand, orders him to clear off by using a goodly number of “raus!” But, very modestly, she also quotes Epictetus and Seneca!

The daughter compromises, terrified as she is by the turn of events, she overacts, may be, in order to avoid the war, as she says, by hook or by crook. Along this gigantic inventory of fixture, the daughter tells the story of her mother, the mother tells the story of her own mother, going back two generations, until that family tragedy under the Nazi occupation and the government of Vichy, that tragedy which endures until today, sixty-seven years later. “Mister bailiff, do you think misfortune could inherited?” asks the daughter.


From the Press
Zabou Breitman portrays the three characters. The amazing distinctness of her acting enable her to reveal the literary impact of Lydie Salvayre’s narrative, as well as its cleverness, keenness and funniness.
L’Express Culture

Very few artists have this ability to be, at the same time, in literary taste (she savours every sentence, gives back flavour, bite and drollness) and in the very life of what is showed.
Le Point

And her work is of utmost quality. Alone on stage, she plays every character with incredible ease. She really springs from one body to the next, from one feeling to the other one, from rage to disappointment, from servility to revolt. It’s a great moment of theatre that we warmly recommend you to share with Zabou Breitman. Every evening she gets hearty applause: a well deserved reward!
Première

We already knew Zabou Breitman was funny, generous and gifted. She drives the point home as a really talented actress and director.
Aufeminin.ch

The grace of Zabou Breitman, her gentle authority, the reliability of her acting, the steadiness of her voice, her beauty, her stage presence emphasizes Lydie Salvayre’s writing itself.
Le Figaro

Joëlle Gayot: She took a gigantic step in suiting to the text. It’s amazing. This show is almost of the nature of a performance.
Patrick Sourd: Zabou Breitman places this show between History and intimacy, the way one would do the splits. She’s superb and her liability affects us greatly, for it’s as disarming as infinitely sincere, her theatre has the tenderness of a theatre imagined by children in their Grand mother’s attic, it’s full of charm and horror.
France Culture 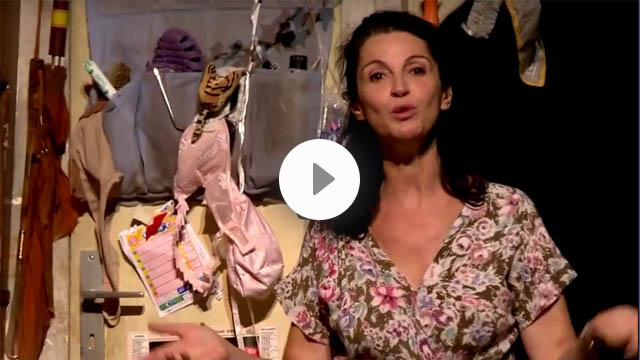 "The Company of Ghosts"
From the novel by Lydie Salvayre
Publ. Editions du Seuil/Editions Points

Ask for the file of production with the Financial Terms

The artists I support